I’m still playing with my reverse enameling and stamps.  A few more to finish and I will have a major coffin load of spoon rests & dishes.  Tonight’s progress: 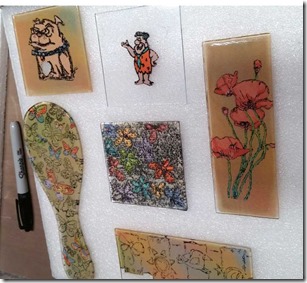 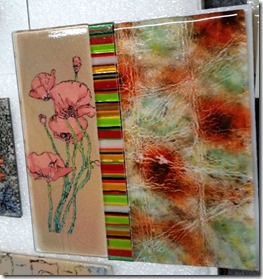 I was painting while heating up our vit kiln for this brown/tan pull.  Oops!  Having said that … SOMEONE (DH) was right there with the kiln and never bothered to look at the temps [Grrr!]!!  So, she ramped up to 1700 degrees.  We have always used some cut glass pieces (i.e. two 2×4 inch pieces side by side) in our stacks.  I believe this crazy-high temp, combined with the few cut pieces, created an air bubble early on that prevented any concentric rings throughout the entire pull.  Hmmm … interesting!

I’m a little bummed, but learning is learning!

Moving on … We had success in the kitchen.  It’s called ‘Million Dollar Spaghetti’ – certainly not low-cal, but definitely yummy.  Our photo is before baking, and before the mound of cheeses (cheddar, muenster and parmesan) were added to the top during the last 15 minutes of oven-time.  We tweaked the recipe with more cheese varieties, summer squash, fresh tomatoes, and a few spices.  (I would add spinach/kale, ground sausage and mushrooms next time, too.)  Of course, we ‘rounded’ the meal out with Pioneer Woman’s “The Bread” … I had to!!! 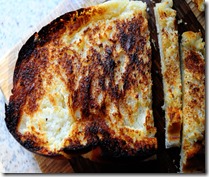 Found a traveler at the (far, far away from the house) end of our driveway recently.  I had just been talking with a (hunter) co-worker about turtle soup … I’ve never had it, but I’m curious about it.  Anyway – DH took one look at those claws and said “Ummm … NO!!!”

Leaving with the ‘Queen of the Rock’, as she wasn’t going to let Victor have all that glory … Miss Cowbell!