I promise to do better!  But here’s the photo journey/update since my last post:

DH bought a 16 foot corn crib, brought it home and set it up.  Why?  Because it’s neat, and I think we will use it next spring to raise turkeys.

Speaking of birds, we raised and processed six meat birds (Cornish Cross chickens) this fall.  I feel like we’ve got the hang of it now (our second year). 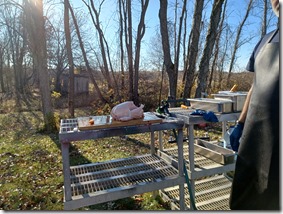 And, we added two Guinea fowl to our laying (chicken) coop.  I’m pretty sure we have a male and a female, so we’ve named them Bacon and Eggs, as the male has long ‘bacon chunks’ growing from his beak/wattle area – and the female should lay eggs – once they reach 9 months old.  It’s interesting and fun to watch the chickens and guineas interact with each other. 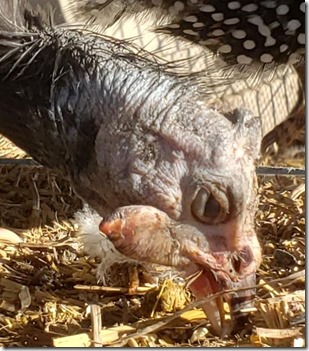 We’ve had a few litters of bunnies recently, so the hutch is overflowing.  We have come to appreciate the term ‘breed like rabbits’ and are taking steps to slow that process down, as we have 23 new babies now … DOH!

I’ve done some cooking.  We made Chicken Noodle Soup with homemade noodles.  We also made a large batch of Seafood Chowder (here is a pic of just a bowl of the soup). 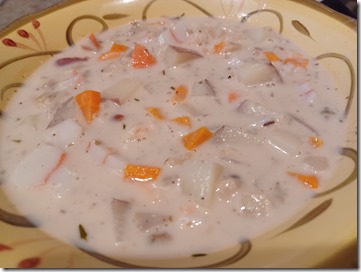 And, we had our Thanksgiving meal, with bacon-wrapped herb-buttered turkey, two pans of Apple Whiskey Stuffing, along with all the usual’s (mashed potatoes, biscuits, gravy, squash, and pies).  Our girls came over (along with my son-in-law), and my mother- and sister-in-laws.  Both of our boys are currently out of state with work training/school, so we talked with them on the day.  It was a great meal and a great day! 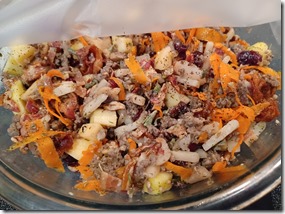 I made pillows for my sister’s she-shed office (next to her goats).  While I don’t have a photo of the office, we’ve had some fun decorating the space.

We continue to raise and play with our Neo and Bulldog puppies … AWWWW!!! 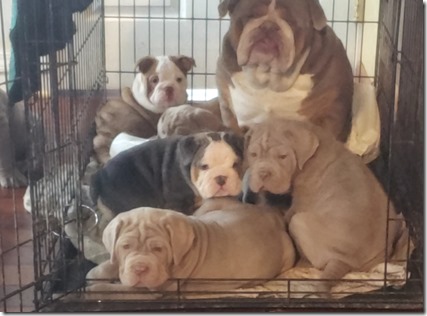 I had my first-ever studio glass class with a family (of NINE!).  They made jewelry, ornaments, plates and night lights.  It was fun and worked out well.  I’m seriously considering offering a few more classes this year … we’ll see.  But for now, I have a clean studio to dig into my own Christmas projects for the season… Yay!!!

And, finally … I started a new job.  I’m working for an insurance company, providing in-home urgent care visits – treating or sending to the ER, as appropriate.  Week one and the next few are all about the training:  Setting up my work office space (in the studio) and work computer/monitors.  Learning the programs, processes and EMR training for documentation of visits.  I have the first week under my belt and am feeling a bit more confident with all that I’ve learned and moving forward.  For the first time in 18 years, I’ll be working days (9A-530P), so that is an adjustment as well.  But, I like it!

So yeah … that catches us up on my tinkering/news, with just over 2 weeks to go until Christmas!  Doh!!!  It’s all good … Be safe, y’all!