Not much to report on this week in the studio, but I am moving a few pieces along …

Custom request dichroic badge reels are a tad trickier to create without running water.  Fortunately, I’m married to a handy guy who keeps lots of buckets around – and I’m surrounded by snow.  So, the outdoors is coming in, one pail at a time to sit by the heat and ‘make water’ … I’d say I feel a bit like a ‘pioneer woman’, but that’s a touch too whiny – even for me.  (BTW, DH did fix the busted pipes, it’s just that the next-level freeze hit below ground too, so there won’t be any working plumbing in the studio until the Michigan earth thaws …)  Anyway, my dichro cabs after acid-etching: 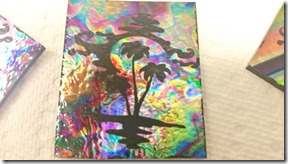 And, a handful of my scenic cabs have been ground and are ready for kiln polishing.  I’ll fire a decal into them eventually, but in the meantime, I’m making a few more.

I tell myself now is a good time to stock up on ornaments, but … it’s too cold and I’m just not feeling it right now.  [Whine!]

Speaking of which, my 30-bottle batch of wine is percolating nicely, and ready for the next step later today (slowing the fermentation process by removing the lees and racking the bucket into the carboy).  I’m making a red wine batch, and I think I’ll get a white going as well … or maybe a sangria … Hmmm, gotta stay warm somehow – and moving 6 gallons of wine around between the storage area and basement kitchen does that! 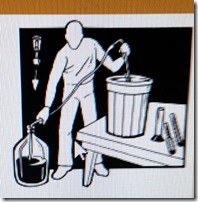 WWU: Nothing noteworthy to report last weekend.  A lot of the same-‘ole/same-‘ole.  [Yep, flu season is still upon us.  Based on what I see in the ER each weekend, you’d think folks had never lived through a few episodes of vomiting before … Time to mentally prepare for this coming nursing tour … Whine?!?]