Oh yea … I am totally the Dian Fossey/Sigourney Weaver of birds (limited only because there are no actual gorillas around here – just human impersonators).  Let me ‘splain …  Yesterday, while minding my own business in the studio, an attacker struck (- just how he made entrance into the studio is still a mystery) … When my heart started beating again, I found the courage to investigate what rabid beast had entered my domain.  It was a[n obviously crazed] bird that quickly tried to make it’s escape by dive-bombing straight into my CLOSED window!  (See CSI evidence photo #1) 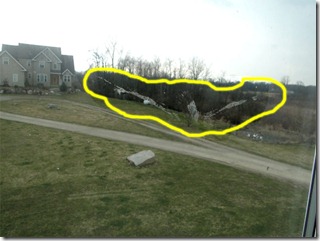 I frantically searched for a weapon tool to move the offending fowl (while I like to look at them from a distance, and even chum for the occasional Humming Bird or Finch– this one was unattractive, uninvited and getting way too in-my-face personal).  And then brilliance struck!  I found this  (interesting factoids included) stashed under my phone table in the corner.  It’s from the left-over stuff that never made it out during the studio renovation.  Why do I have a toilet bowl brush NOT in the bathroom, you ask?  Because I have a nice, new one that sits in a HOLDER in the bathroom – one that coordinates with the decor, duh!  (And, I’m pretty sure this one never actually cleaned a toilet, so why throw it out? … I’m also obviously clairvoyant and knew it would be needed someday!) 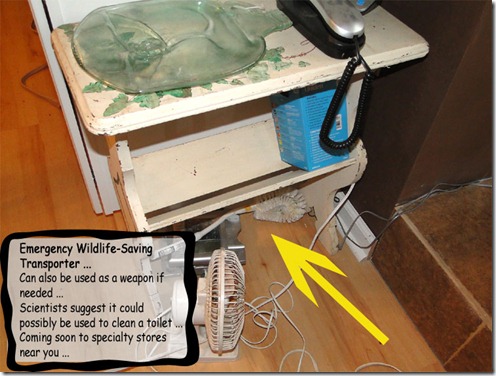 I wish I had photos of the bird/event – but alas, I was alone and frantically trying to save lives (mine and then his) … I was doing a whole lot of whispering, too as I carried that bird on the toilet brush Emergency WildLife Transporter (or EWLT, for short), while staring into it’s open beak, watching it pant and willing it NOT to peck my eyes out!  (But this picture sums up the look of the bird pretty accurately.)

We (‘Freddy Krueger’ and I) made it safely to the deck door, where he promptly flew off… never once thanking me for saving his life – or even telling me his name – the Ingrate!  And I now have a bird-print on my window that needs cleaning … But, I also have a new marketing idea (EWLT tool) in the works, as well as another discovered skill.  They’ll be calling me Nurse Doolittle yet, darn it!   We’ll get around to sharing some glass photos in our next post … promise!  But now – its time for SWAMP PEOPLE!!

2 Comments on “She’s a bird-whisperer too …”